The ground breaking Tetra 2007 Tategoi challenge really captured the imagination of Koi enthusiasts. In April 2006 three high grade Tosai were placed in a top class 18,000 gallon Koi pond and fed exclusively on Tetra Koi Excellence for a full year! We invited Koi keepers to use their skills to judge which Koi would be the best at the end of the growing period! The results in terms of growth and development were simply staggering and the response by Koi keepers so enthusiastic we overran the challenge until Autumn 2007!
What we didn’t mention is that we didn’t just put three Tosai in the Koi pond in April 2006 - we actually put FOUR Koi in the pond!!

That means we still have an amazing Tategoi Showa that’s already been growing and developing since April 2006! In addition we also procured another two Koi during 2007 and all three Koi have been growing in our TKE pond are all now Nissai and absolutely amazing, and guess what? – You now get the chance to win these three Koi!!!

All serious Koi keepers know that flash-in-the-pan foods come and go, and the only real test of how good a food really is, is to assess it over time. Tetra have always been keen to take on any challenge and the 2007 challenge demonstrated that not only does Tetra Koi Excellence provide comprehensive and balanced nutrition that results in great growth, you may remember that the biggest Koi grew from 35cm to a staggering 53cm in the growing period, but also, and crucially all developmental elements of all three Koi specifically: body shape, skin quality, pattern and colour delivered impressive across the board improvements.

The 2008 Tetra Tategoi Challenge is our most ambitious and innovative ever, and by the end of this latest growing period, will see three high grade Koi one of which will have for almost three years, been fed exclusively on Tetra Koi Excellence – surely the most definitive food test ever undertaken. The very best part is YOU get the opportunity to win one of the three Koi!!!!! Our 2008 Tetra Tategoi Challenge Koi are: a stunning Ogata Showa, a Hasegawa Kohaku and a Dainichi Showa:


The amazing 2008 Tetra Tategoi Challenge will be on the Tetra web site soon and entries will be open until 31 December 2008. Entry forms will also be available at most Tetra stockists or download the PDF complete it and send it snail mail or better still simply email us with your entry nikoimag@aol.com listing the three Koi and your placing decisions - and remember you are not just assessing which Koi will be the biggest but which Koi you believe will emerge to be the best!! 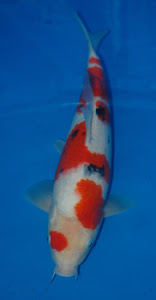 Koi Sites Worth a Look